You are here: Home / Software / How Big is a Windows 10 Installation on SSD? 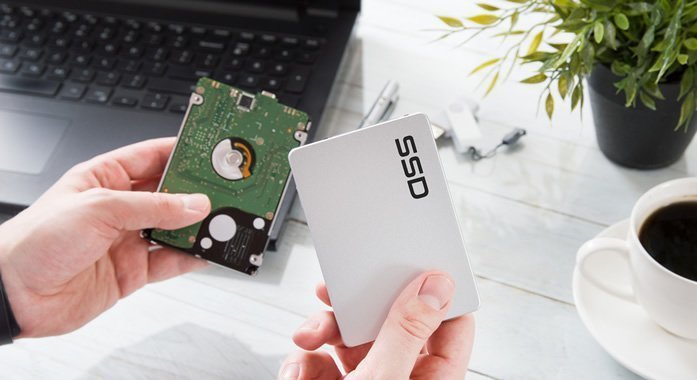 Windows 10 is an operating system from Microsoft designed for use by IoT, personal computers, embedded devices, and tablets. It was released on July 2015 and was meant to act as a follow-up to its predecessor Windows 8. The software giant stated that it will continue to release new updates for Windows 10 in perpetuity as opposed to releasing a successor.

Why Use a Solid State Drive (SSD) for Windows 10 Installation?

It is not possible to answer this question without determining how big is windows installation on SSD. If the drive is big enough to run Windows 10 then you can expect a substantial boost in PC performance when using a SSD.

These drives are all about speed and performance. From their excellent battery life to no lag gaming to application launches, the drives also happen to be more durable than mechanical drives. Some of the reasons to install Windows 10 on these drives include:

The solid state disk is one of the reasons why Surface devices and modern laptops have improved battery life. The drive is known to consume less power—up to 2600% less according to some studies, this means that a user can squeeze extra minutes and sometimes hours from their PC. The fact that they have small movable parts also means that they do not require a lot of energy to operate.

The solid-state disk outperforms its predecessor the HDD in almost all aspects including faster boot time, music, office applications and gaming. Games loaded for example, on this disk will load much faster than in a conventional HDD and gamers will also appreciate higher frames per second rendering thanks to having Windows installed on a SSD.

What Size SSD is Recommended for Windows?

When looking to answer the how big is windows installation on SSD? puzzle, there is a need to note that installation of Windows 10 on a solid state disk requires a minimum of 16 gigabytes storage and this is the minimum it needs for it to run.

Given that this capacity is low, it means that you will not have enough room to install updates. This is a common problem experienced by Windows tablet owners so look to buy the best SSD drive you can afford.

When you are looking to purchase a storage device, the main focus should always be on its capacity. A device with a small capacity will not have enough room for the operating systems and the programs you need to perform your tasks.

If you only have the solid state drive in your machine, ensure that it is loaded as the boot drive. This helps to ensure that you will remain with enough space to hold additional data. Today, the entry size for these disks is 250GB. In actual size, the disks range between 250GB and 275GB in size. This is enough space to mount Windows 10 and any other additional programs you may require.

Do I Need a Fresh Installation of Windows 10 on My SSD?

Often it is recommended for it to be done on your solid state drive after purchasing a new drive. As you continue to look into how big is windows installation on SSD you should note that Microsoft recommends creating a fresh mount with every new drive. If using an old USB, use a media creation tool to mount the new operating system.

The reason being that the operating system mounted on the old USB may contain an older version of Windows 10. In this case, you may have the old version, 1511 and in some cases the original version: 10240. Considering that it has been a few years since the two versions were released, chances are that they are no longer supported.

There is a probability that the operating system will start to download updates automatically. It is far much easier for you to download a new version and mount it yourself. A new mount will come with the latest updates from Microsoft. Considering that Microsoft is continuously releasing new updates, the new mount will ensure that you have a stable operating system in your computer.

During the mounting process, you can skip the activation section. It will automatically activate itself when it connects to the Microsoft activation servers. This applies to all Windows OS including Windows 7, 8, 8.1 and 10.

How to Install Windows 10 on a SSD?

Are you looking to make a fresh mount of Windows 10? If so – follow the steps below:

STEP 1: Start by downloading the Windows 10 Media Creating Tool. The tool will help you to generate a new and clean package for mounting on your device. You can either create it on a CD or USB drive. Once it has been created, load it up and click on the ‘Create installation-media for another device’ button. After you have selected this option, follow the prompts to the end.

STEP 2: Your media is now ready. Connect your mounting device to your computer. You will need to shut the computer down, open the back case, remove the HDD present, and replace it with the solid state disk.

STEP 3: Start the computer and press down a specified key (it can either be F2 or F12 depending on your computer model). This will make the computer to boot into the BIOS setup. Proceed to modify BIOS setup to ensure that your machine loads from the mounted disk.

STEP 4: Once it is done loading, choose your preferred language, and other additional preferences. Navigate to the bottom section and click on Next.

STEP 5: When the OS asks you to input the activation key, type it in or press the skip button to active the operating system later.

Mounting Tip: Regardless of whether you are upgrading to Windows 10 from previous versions, i.e., Windows 7/8, and performing a fresh mount on a clean drive, you will have no option but to purchase a product key. If you do not, you will not be able to activate your version of Windows.

If the drive already had Windows 10, you can skip activation and Windows will automatically activate it when the mount is complete.

STEP 6: When asked how you would like to mount the operating system, make sure to select ‘Custom’.

STEP 7: Select the drive where you want the operating system installed and press next.

STEP 8: Follow the prompts to the end of the installation process.

Many users are today looking for ways to upgrade to Windows 10 on their solid state disks. The main reason why there is such a demand is that the disks are renowned for their superior performance, reliability, and durability. The fact that they have a fast load time also helps matters as programs boot up much faster.

Tika Sanchez is a Windows software engineer and enjoys reviewing apps that help to make life easier and prides herself on bringing PC PowerZone readers something different to other tech blogs. Away from writing, she enjoys travelling abroad, meeting new people and her best friend is a dog called Bill.